As an Amazon Affiliate

Some 2,000 wells in Minnesota have been contaminated. People are drinking bottled water or using the NSF P473 water filter.

The epicenter of the PFOA and PFOS (collectively known as PFAS) water pollution problem is just a couple miles from my home.

However, the water, the air, and the plants everywhere on Earth are polluted with PFOA and PFOS chemicals.

The water you drink almost certainly contains these toxic “forever chemicals” that can cause many serious diseases. Therefore, the new NSF P473 water filter is needed by everyone.

The group of toxic chemicals known as PFAS are called “forever chemicals”, because mother nature can’t break them down and neutralize them.

Perfluoroalkylated substances in water: What you should know and how to eliminate them

Perfluoroalkylated substances (PFAS) are a large group of chemically synthesized compounds that consist of a hydrophobic alkyl chain of variable length (totally or partially fluorinated), with a hydrophilic end group.

Due to this amphiphilic character, these substances have a high chemical and thermal stability, as well as a high surface activity.

PFAS is widely used in industrial and consumer applications that include:

An important subgroup is organic (per) fluorinated surfactants, to which perfluorooctane sulfonates (PFOS) and perfluorooctanoic acid (PFOA) belong. Due to its widespread use, PFOS and PFOA, their salts and precursors have been detected in the environment. (1)

How Can They Pollute The Environment?

PFAS have been manufactured for more than 50 years (not natural) in a wide variety of consumer products (fabrics, carpets, computers, etc.), as well as in agricultural applications.

Which has led to their dispersion through the environment, entering the food chain until its inclusion in Annex B of the Stockholm Convention in 2010. Which means that from then on its use is restricted to a defined list of applications.

Although its production has been restricted worldwide, its release to the environment is mainly due to the release from products treated with PFAS or the inappropriate disposal of products that contain them. (2)

Are Perfluoroalkylated Substances A Health Risk?

Concern about the effects of PFAS on public health arose after several studies in experimental animals that indicated that these substances had toxicological effects: hepatotoxicity, developmental and behavioral toxicity, immunotoxicity, reproductive and lung toxicity, hormonal effects as well as genotoxic and carcinogenic potential. (2)

The diet is the main source of human exposure to PFAS, particularly fish and meat products (mainly liver).

For PFOA, other sources of non-food exposure, such as air pollution, also contribute to total exposure.

There are other less important routes of exposure, such as drinking water for PFOS and PFOA or non-stick cooking utensils and food packaging materials (microwave popcorn bags, for example) in the case of PFOA.

It is recommended to do a good washing of food before consuming it, as well as to use specialized filters and methods for water decontamination.

The Concern In Pregnant Women

High levels of perfluoroalkylated substances (PFAS) in the blood during pregnancy can interfere with the metabolism of glucose and lipids. (3)

Perfluoroalkylated substances in blood during pregnancy are a health concern. According to recent research, these substances can interfere with the metabolism of glucose and lipids, increasing the risk of chronic diseases.

The research was based on 1240 pregnant women, blood samples were collected to measure the concentrations of PFOS, PFHxS, PFOA, and PFNA, as well as other metabolic markers.

The findings of this study suggest the obvious relationship of chemical contamination with perfluoroalkylated substances with diseases such as obesity and diabetes (other risk factors such as diet and physical inactivity were also considered).

These substances can accumulate in agricultural products, in animal tissues, in the environment and can remain in living organisms for years.

That means that these chemicals are building up in your body over time, and will eventually make you sick. Protect yourself now, before it’s too late. Buy one of the NSF P473 water filter systems you see in this article.

Risk factors for exposure to PFAS include diet, migration into packaged food, drinking water and inhalation of dust in the environment.

The results of the different studies carried out suggest a relationship in the concentrations of PFOS and PFHxS with gestational diabetes and glucose intolerance.

What Else Do We Know About PFAS At The Scientific Level?

Due to a large number of perfluoroalkylated substances, their precursors and the substances derived from them, scientific reports have been published. Those reports include the oral toxicity of these compounds in animals and humans, in the form of a systematic review of the current scientific literature. Those reports will certainly help the risk assessment agencies worldwide.

What Are Tolerable Intake Levels?

A tolerable daily intake (TDI) of 150 ng/kg of body weight for PFOS and a TDI of 1500 ng/kg per capita for PFOA. Which is the maximum amount that a person can ingest daily throughout his life without causing adverse health effects. (4)

Various health institutions around the world have shown concern about the possible increase in water pollutants, also the lack of knowledge of the appropriate methods to prevent contamination.

What Measures Have Been Taken To Reduce Exposure To PFAS?

How To Remove Perfluoroalkylated Substances

According to the EPA (Environmental Protection Agency), there are methods to eliminate PFOA and PFOS up to 99.9% (EPA recommended level).

The powdered activated carbon process is highly effective for the removal of residual and old PFAS.

All in accordance with the health standards established by the United States Environmental Protection Agency (EPA).

Recent studies have shown that consumer awareness of the presence of PFOA and PFOS in public water supplies has increased. Overexposure to these elements would cause adverse health effects, such as cancer, liver damage, immunological and thyroid disorders. Both are on EPA’s List of Contaminant Candidates (CCL 3).

In May 2016, EPA set the combined levels of PFOA and PFOS in drinking water at 70 parts per trillion.

In that sense, NSF International developed the protocols in response to agency requirements.

Thus, the P473 certificate is designed to provide an additional barrier against these chemicals and other supplements in the treatment of drinking water.

3. PERFLUOROALKYL ACIDS: What Is the Evidence Telling Us?

4. PFOS and PFOA limits and tolerable daily intakes (TDI) for fish in worldwide regulation according to the protection goals.

Here is a pitcher type PFOA and PFOS filter

Here is our Home Page 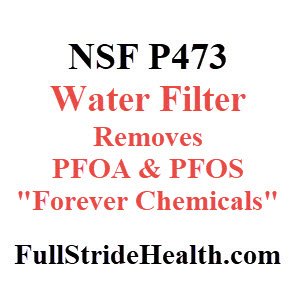 The products mentioned and any provided information are not intended to diagnose, treat, cure, or prevent any disease and are not a substitute for a face-to-face consultation with your healthcare provider, and should not be construed as individual medical advice.

You can find out more about which cookies we are using or switch them off in settings.

This website uses cookies so that we can provide you with the best user experience possible. Cookie information is stored in your browser and performs functions such as recognising you when you return to our website and helping our team to understand which sections of the website you find most interesting and useful.

Strictly Necessary Cookie should be enabled at all times so that we can save your preferences for cookie settings.

If you disable this cookie, we will not be able to save your preferences. This means that every time you visit this website you will need to enable or disable cookies again.